Episode 1
Natsumi Bekki (戸次 菜摘 Bekki Natsumi), also known as "Becky" (ベッキー Bekkī), is a teacher at Tamo Agriculture School and the Homeroom teacher of 2-A class. Because of her mood swings in her class, she has this trait of suddenly plunging the entire class into despair. Despite her young looks and demeanor, she is a true adult (She is forty years-old). A running gag involves Bekki and Kōsaku Hata in hilarious situations such as her telling that it's okay to do "it" since it's him. She is desperate to get married, and this desperation results in her erratic, near-hysterical behavior, especially when the very subject of it is brought up and often gets jealous of younger girls. It is also mentioned the only reason she has not yet been fired for her inappropriate behavior is because her father is an important politician.

Becky is a desperate psychotic pervert who is very complex about her single life which makes her do a lot of strange stuff (oiling herself and filming herself). She is somewhat mean to Ringo Kinoshita as she once claims that Ringo took her spot of the school's idol and she is jealous of her youth. 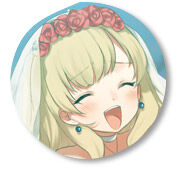 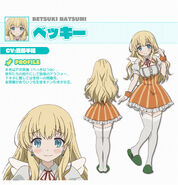 Becky invites the class to eat sushi from her naked body.