Period 1
Minori Nakazawa(中沢 農 Nakazawa Minori) is Kōsaku Hata's childhood best friend/classmate whom she has a major crush on that her over-protectiveness shot up with Ringo Kinoshita's arrival and Minori competes against her for his affections. She even challenged her in Episode 3 to a series of contests because of that. Though after what seems to be their "fight" on the rice fields in an episode (she called Ringo a "Thieving Cat" during that time), they seemed to be friendly with each other.

Minori has olive hair, green eyes with olive shades and large breasts (the colors of her hair and eyes are rather brighter and lively in the anime) and a busty figure.

It appears that Minori is over-protective of Kōsaku Hata and this over-protectiveness shot up with Ringo Kinoshita's arrival that she even challenged her to a series of contests because of that (Episode 3). Although after what seems to be their "fight" on the rice fields in an episode, they seemed to be friendly with each other.

When Kōsaku Hata's mother died and his father abandoned him, Minori's family took care of him.

Minori is the reason that Ringo Kinoshita transfer to their school by sending a letter to her. 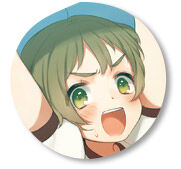 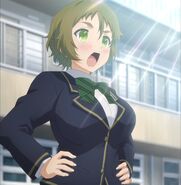 Minori shows off her crotch.