Period 1
Kei Kamatori (過真鳥 継, Kamatori Kei) is a student at the Tamo Agriculture School, a classmate/friend of Kōsaku Hata and Minori Nakazawa and the son of the owner of a big agricultural company -- to whom he lost in an agricultural sale showdown, prompting him to go abroad for the seminar he was offered.

Kei has neck-length blue hair (pitch black hair in the anime), blue eyes (pitch black eyes in the anime) and he occasionally wears round-square glasses (his glasses is much like oval with no frame on the tops).

Contrast of his appearance, Kei is a cool-acting man who likes on throwing jokes that he seemingly annoys Kōsaku Hata and he also seems to act dense towards Kochō Yoshida.

He is very knowledgeable in almost everything, unlike Hata, he is very observant and open minded. However, he is also a bit of an exhibitionist. He is aware of Yoshida's feelings for him, but it wasn't clear if he also feels the same for her.

As said earlier, Kei is the son of Hajime Menjō, the owner of a big agricultural company--to whom he lost in an agricultural sale showdown, prompting him to go abroad for the seminar he was offered. He had a falling out with his father due to the latter using chemicals in his farming methods that his wife, Kei's mother, was terribly sensitive to which contributed to her early death. This is the reason behind Kei's desire to farm only organic goods without the use of chemicals such as pesticides. 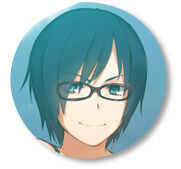 Kei in the novel.