16, his birthday is on September 20th

Episode 1
Kōsaku Hata (畑 耕作, Kōsaku Hata?) is the protagonist of the No-rin series. He is a student at the Tamo no Rin Agriculture School and a huge fan of national idol named Yuka Kusakabe.

Kōsaku has straight dark olive green hair (brown hair in the anime) that is seemingly messed up on the tips and golden eyes (deep taupe in the anime).

Kōsaku is usually seen wearing his school uniform or his farmer attire.

Kōsaku is such a kind and a high-spirited person who can be seen acting childish sometimes, but he always put out all his effort when it comes to serious matter.

Kōsaku is the childhood friend of Minori Nakazawa who has a dark history with his family that he chooses not to speak up about it until Ringo Kinoshita successfully gains his trust.

When he was a little kid, his parents decided to become farmers and moved to Aioi. However, the failure of their first crop left them in debt and caused his family to fracture. In order to make ends meet, his mother got a part-time job while his father continuously left town in order to find work. Eventually, his mother became sick and died, after which his father left Aioi for good and abandoned. Afterwards, he was raised by Minori's family.

Kōsaku always admired Ringo Kinoshita ever since he was little that he always tried to gain her affection by calling her the world's cutest girl. The reason for this was because he sees her as a symbol for a life in the city that he desperately craves. The feelings were mutual, felt the same for him.

At the end of the novel series, it is later revealed that she always loved Kōsaku and she confesses to him in the 8th novel, to which he reciprocates and they both form a couple and start going out. 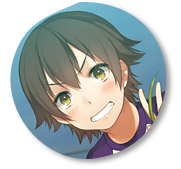 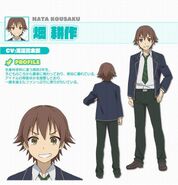